From a fog of exotic perfume arises a plague of amorous zombies, and now they’re invading all your favorite fairytale kingdoms! What the heck is going on here? Who’s responsible for this apocalyptic mess? There’s only one way to find out -- it’s time to take up arms and carve your way to the root of the problem in a spray of bullets, flames, and grenades! Continue Reading

Whoever thought that happily ever after also meant fending off the undead? This is the major problem that Momotaro faces when he comes back to his village only to find out that zombies are everywhere! Thankfully, as tenacious and dangerous as these zombies can be they will still go down with a few well aimed headshots. Momotaro’s submachine gun certainly does a good job of it, and it is up to you to help him bring down those nasty undead buggers.

A Touch and a Slide

This graphically impressive game is deceptively simple in terms of gameplay: you tilt your device in order to strafe left and right, press on the screen to aim and shoot, and lastly, swipe left or right to execute a dodge move. Enemies will keep popping up onscreen and move towards the foreground where you character is –the goal is to eliminate all the enemies that appear while avoiding their attacks.

Zombies come in a variety of shapes and sizes, and depending on the type of zombies you encounter, placing your shots in certain parts will have different results. As always, headshots have the highest bonus for eliminating zombies straight out, but expect to use up several bullets before they go down. The torso is not much of a viable target unless you are using the heavy chain gun because of the damage reduction. Lastly, the arms are easy to shoot off –it will not kill the zombie, but it will disable it from doing certain attacks. Be warned though, armless zombies are still dangerous, and some will become even more aggressive when their limbs get taken off.

The best part of the action is the fact that you can blow stuff up. Almost everything on the stage can be blown up (except the floor). This means walls, trees, power lines, boxes, vehicles, buildings, anything can be shot at and destroyed. Some explosive items in the stage will damage enemies with the impact blast while others simple add to the score when

This is a pretty decent recipe for a quick action fix –if that is what you are hankering for. But aside from that, the game is pretty basic and repetitive –this means that going for the premium content is a must if you want to truly enjoy the game.

While you could choose to buy specific features on a piece by piece basis, our recommendation is that you buy the full pack. Sure, it will knock you back by a few quid, but it is much cheaper than buying every map, character, and weapon upgrade in the game –the only thing you will not get in the full pack is the Wonderland stage expansion –which is not all that important once you already have all the other things (we would only recommend getting the Wonderland map if you truly love the game, otherwise, the full pack set is more than enough).

The best thing about the full pack is that you get access to the entire character roster in the game. While Momotaro makes for an interesting player character, there is a certain charm to watching Snow White dashing back and forth as she empties an entire clip into zombie. Also, getting infinite ammunition for the flamethrower and the heavy chain gun certainly makes the game a whole lot easier –especially if your main goal is to blow up as much of the stage as possible (and you really should, that is where the fun is!).

Well, it is a Japanese game, so what can say? Anime style artwork is certainly one of the cutest in the world and even when used on rotten zombies, there is an undeniable appeal to it. Momotaro and the fairy tale heroines are all cute and adorable while still possessing a look that says they can still kick ass.

It would have been nice if the game was cel shaded, but the basic polygon rendering still looks good. The visuals are crisp and easy to follow –though there are times that so much activity fills up the screen. Each object in the background has been made so that they blow up nicely when hit with enough bullets so enjoy wreaking havoc (yes, in the course of this game, your player character will be the main cause of destruction in the various stages –not the zombies).

The main story is delivered in a series of images with a bit of narrative –the artwork stays true to the Anime style of the game. The line art for the characters are outstandingly well done, the details of both the 2D and 3D renderings of the characters are also consistent. This makes the game feel cohesive and fun to play.

The menus are mostly out of your way when playing the game, they are only noticeable in the main menu and when the game is paused –which means that there will be no distractions as you happily blast away everything in sight. Speaking of menus, those of you who did buy the full pack premium content may want to turn off the infinite ammo mode for the flamethrower and the heavy chain gun. That is, if you are looking for a challenge.

A Little Back Story

Most may be familiar with the stories of Little Red Riding Hood, Alice through the Looking Glass, Snow White, Dorothy and the Wizard of Oz;but Momotaro is a Japanese cultural icon, and is one of the folk tales that is not-too well known among westerners.

The story of Momotaro starts with an old childless couple. The woman finds a peach travelling down a stream and takes it. She eats the peach and regains her youth. Her husband comes home and is surprised at what has happened. He too takes part of the peach and also regains his youth. They have a child shortly after and is named Momotaro;Momo means peach and taro is a common name for a firstborn son. In more child-friendly variations of the story, Momotaro is depicted as a baby inside a giant peach (and thus saving parents from having to explain the birds and the bees until a much later date). Momotaro would then grow up to befriend talking animals and slay some demon-type monsters known as Oni. His victory over the Oni earns him riches that he then shares with his parents.

This game is a definite must buy –and by that, we mean just going for the promo pack that contains all the maps, characters, and add on bonuses. Do not bother with purchasing each individual item as that would be costly in the long run. Getting the pack means having plenty of stages to try out and several characters to keep you company. The gameplay is well balanced in terms of providing players with a challenge. The tilt-action style controls may seem a bit gimmicky at first, but it eventually becomes easy to use (which helps a lot in the later stages). Visually, the game is quite appealing in terms of character design and artwork. The fact that almost everything in the game background is a destructible object is a definite plus in our book. Lastly, the music is well refined (they match the stages quite well), easy to listen to, and does not get tiresome even after a couple of hours of playing. We give Akaoni Studio’s game a bancho zombie’s 87/100 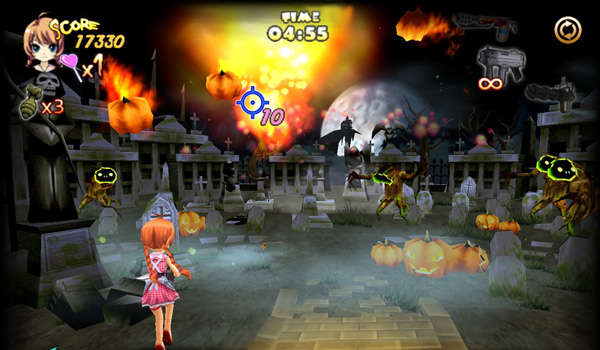 Zombie Panic in Wonderland is developed by akaoni Studio.