Resident Evil 5 marks the comeback of one of the main characters. Quite a while has passed since Chris Redfield has been given ample screen time and it definitely shows. Instead of working for STARS, Chris is now a part of BSAA, an organization dedicated to assessing and eliminating bioterrorism. In Resident Evil 5, he teams up with Sheva Alomar to investigate a major terrorist threat in the fictional African region of Kijuju. It may a long way from the old mansion outside Raccoon City, but the game never strays far from the spirit of the series. Continue Reading

The story is definitely in line with traditional Resident Evil fare, just larger in scope. However, Resident Evil 5 is less survival horror and more action-packed bullet fest. With the overhauled direction of the game, you can do without a blanket to hide under. That's a good thing if you enjoyed Resident Evil 4 more than its predecessors. On the other hand, fans of the original may miss the paranoia that comes with things that go bump in the night.

Now comes a general bane of Resident Evil fans: controls. Although you still can't shoot while running away from nasty, virus-infested baddies, the stiff tank controls have been ditched in favor of a smoother system which gives your fearless protagonists the ability to strafe -- while you're not aiming. It's not the best but it works good enough when you're in a pinch against mutated cockroaches.

The inventory has gotten a makeover as well. No more pausing on a whim to, say, mix herbs in the middle of being chased around by zombie dogs. In Resident Evil 5, you can only take what you can carry, so to speak. This translates to a maximum of nine active slots during a mission and extra storage for hoarder-worthy supplies and treasure pick-ups. Every item and ammo type will take up a spot in your active inventory, which means that you'll have to "specialize" on a reliable set of weapons per mission, if only to ensure that you don't run out of bullets during a crucial battle. Having a co-op partner helps of course as you can switch things around and consolidate supplies without needing to ignore a single box of shotgun shells too often. Of course if you constantly spray bullets on Veteran Mode, you probably won't have to worry about having too many boxes of ammo.

Speaking of which, Resident Evil 5's co-op mode will probably be the reason you'll be playing it over and over again. Aside from trophies, of course. Be it with a local or online partner, the system is nicely done. While roles are interchangeable for a majority of your play through, you can expect scenes that will put your teamwork to the test. Be it for quick time events or boss battles, you will need to be in sync with your partner to move things along quickly. Don't worry, unlike Katamari Damacy's confusing system which has been known to utterly decimate relationships, Resident Evil 5's system is easy to work with. As we've mentioned, you can switch supplies on the fly and you'll get warm and fuzzy feelings for successfully healing your dying partner. Hands down, this is one of the highlights of the title, making it one of the best console co-op games for its time.

For the first time in the series, Capcom has decided to use motion capture for cut scenes. Needless to say, it has made the character models move around in a more realistic manner. That doesn't mean they won't be performing any shocking stunts but it does make everything a whole lot prettier. The lighting is certainly top-notch, giving every location its own unique look. The attention to detail carries over to the believable voice work. Nuances such as Wesker's subtle snarls or strained grunts during quick time events give the characters, well, more character. We also found the casting to be spot on, especially when it comes to Karen Dyer who play's Sheva.

The Verdict: Zombies are Fun

To sum it all up, Resident Evil 5 has all the makings of a classic. While it may have deviated from the old survival horror formula, it certainly has plenty of its own assets to offer. There's an unmatched co-op system, improved controls and plenty of challenges to keep hardcore gamers busy. On top of that, it has great visuals and solid voice acting to keep you immersed in the wonderful world of Plaga. 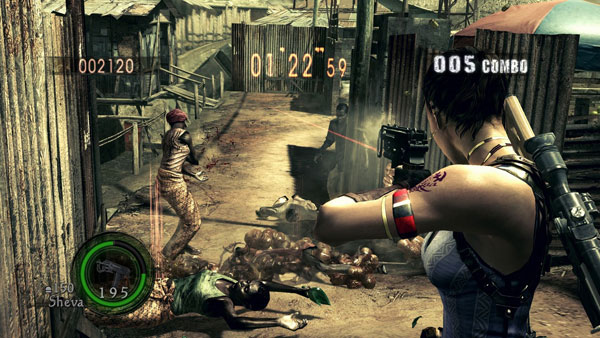 Resident Evil 5 is developed by Capcom.