Plants vs Zombies: Garden Warfare is definitely one of the biggest surprise hits for us. The game is based on the popular tower defense game for mobile devices; PvZ: Garden Warfare is a third person multiplayer action shooter that pays respect to the source material and manages to surpass it in so many ways. The humor is top notch, the gameplay is addictive, and the community that plays it is ever growing. Garden Warfare have you playing it over and over for hours on end, and it will be worth it. Continue Reading

Loyal to the Core

The original Plants vs Zombies games became quite popular because they we accessible, easy to play, and knew how to deliver simple jokes and gags –of these three factors, it is the self-referencing humor that leaves the strongest impression on the players. Garden Warfare continues this tradition.

From the visuals, to the audio, to the gameplay mechanics itself –PvZ:GW is a running joke that will keep you grinning for hours. Sure, there are a few occasions when the game may get a little daunting or even frustrating, but these little moments are quickly washed away by the unabashed slapstick humor that runs prevalent throughout the game.

On the surface, it is easy to approach GW even without having played the original games –the sheer notion of killer plants attacking zombies is already a great recipe for hilarity. But those who have played the app games will find plenty of details sewn into the very fabric of the game; many of the stages, unit abilities, and even the sound effects, reference gameplay content and mechanics of the original PvZ titles.

Defend the Base: Garden Ops

Our favorite game mode in Garden Warfare is none other than the Garden Ops mode –this is actually the closest the game gets to the original tower defense gameplay. In here, players must find gardens to use and defend against attacking zombies. All human players will be playing as Plants and aside from using your active controlled plant’s abilities, you must also make use of pots and seeds in order to increase your defensive strength. The addition of booster packs makes things more interesting as the limited seed inventory makes strategizing much more important (this is doubly true if you are playing in cooperative mode).

It does take a few tries before new players can get the hang of playing as a Plant (or a zombie for the other modes), but the great thing about Garden Ops is that it is the best place for players to learn –the non-competitive nature of the stage goal means that you get more chances to experiment. Of course, you will want to play a lot of times in order to be familiarized with the many stages that appear in the game.

If challenging other players is your thing –then you will probably enjoy the other various modes of PvZ. Vanquish, Gardens and Graveyards, Suburbination, and Taco Bandits may all sound like strange game modes, but they are basically FPS favorites given different names: team deathmatch, zone capture, domination, and capture the flag. Of course, Garden Warfare is more than just an FPS game given a PvZ skin –the mechanics are not as straightforward as most players will expect, and the change is a really welcome thing.

Plants and Zombies both have very unique abilities based on their selected class –with each class having access to at least three different skills. They can also move around the map quite differently –allowing for really high jumps, gliding, and even a few abilities that allows players to burrow into the ground. These little differences alone sets the game apart from other FPS titles, and there are even more fun and interesting things about PvZ that we have not gotten into.

One of the things that many players will notice after playing a few rounds is that the classes are well designed: they are easy to learn, fun to play, and not a single one feels too overpowered. Whether you are playing as a zombie or as a plant, there is a lot of fun to be had and it never feels like the opposing team has abilities that are cheap. Skill and teamwork is what wins matches in the game –and many competitive players will certainl appreciate that.

This balance even extends to the stage design: the maps are not advantageous to one side only. Players are given free rein to approach situations in any way they want: straight on or flanking –battles are fast paced and at the same time, forces you to think of good strategies.

The one thing that is noticeable is the difference of skill between experienced players and newbies -that is an expected thing. The good news is that learning to be better at this game only requires practice, which is easy to get when you play coop mode. After a few rounds on that, dipping your toes in the more competitive versus matches will be a lot easier.

The Verdict: A Surprise Hit

Who would have thought that the folks at Popcap and EA could come up with such an impressive action game based on a mobile app? Well, they did, and gamers should rejoice for Plants vs Zombies: Garden Warfare is an excellent game on various front. Sure, it is hardly banking on its zombie-ness (with the sheer lack of scares and creep-outs), but also embraces the humor of the PvZ series.

Seeing the plant and zombie animations converted from 2D sprites to 3D models is nothing short of fantastic, especially when it manages to capture the comedic charm of the apps. It would have been easy for the developers to go for the typical monochromatic approach of grittier, more-realistic 3D, to appeal to the more ‘serious’ action players; but their dedication to retaining the feel of the series earns them the love of many true PvZ fans. 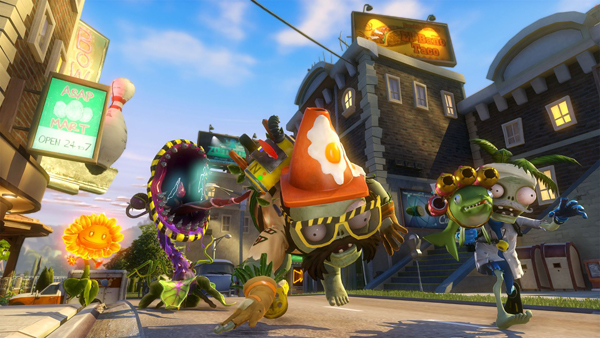 Plants vs Zombies Garden Warfare is developed by PopCap Games.